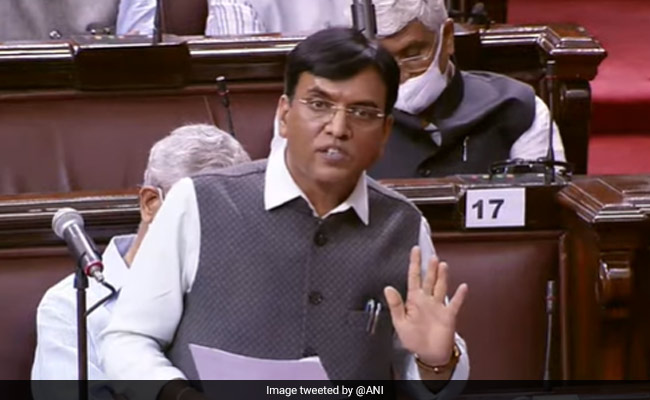 Mansukh Mandaviya said the lockdown was needed to help India build its defences against Covid.

The government put up a strong defence of its handling of the Covid pandemic saying that despite hurdles, the country had tackled the crisis at home and also helped the world. Acknowledging the large number of fatalities, Union Health Minister Mansukh Mandaviya, however, said the deaths must not be blamed on any one person.

“We have worked for all Indians to ensure that the pandemic is dealt with. We have done no politics in this,” Mr Mandaviya told the Council of States.

“When there’s need to work together and implementation has to be done by the states, at that time we never said ‘this state failed’ or ‘that state didn’t do this’. I don’t want to do politics, but many states have 10-15 lakh doses of vaccines with them. I have data,” he said.

He said India did not have a single laboratory to test Covid at the beginning of the pandemic. Neither did the country have the capacity to manufacture PPE kits. The necessary facilities were built up only subsequently, he said, justifying the months-long lockdown imposed on the country.

The minister also expressed pride in India’s service to the world at a time of such crisis.

“We built the infrastructure from scratch…Hence the complete lockdown was necessary. Without that the spread would be rampant at a time we were not prepared,” the minister said.

“Not only did we build the entire infrastructure, but when the world needed medicines like hydroxychloroquine, we sent it to over 123 countries. Even the President of the US acknowledged the help from India.”

There was no delay in setting up laboratories and manufacturing facilities or approving indigenous research towards a Covid vaccine, Mr Mandaviya said. He cited Hyderabad-based Bharat Biotech’s Covaxin as a product of such initiative.

“We accept there have been deaths due to Covid. The Prime Minister himself has said deaths must be recorded. There is absolutely no reason to hide this…But to blame all deaths on one person is not the right thing to do,” he said.

Mr Mandaviya countered criticism of PM Modi’s call to the citizens of India to acknowledge the efforts of the country’s Corona-warriors by clapping, ringing bells, clanging utensils, and other means at the end of the Janata curfew on March 22, 2020.

“They say why did we do thaali-taali. We did it to encourage Corona warriors. We did it for the policemen standing on the roads for our protection. We did it in honour of the healthcare staff — from the lowest to the highest level — who worked during Corona pandemic,” the Minister said, adding that his own daughter had worked as an intern doctor in a Covid ward.

When the Trinamool Congress’s Derek O’Brien asked how many Indians wold be vaccinated by December 31, pointing that less than 5 per cent had received the shots till now, Mr Mandaviya said efforts are on to ensure a maximum number of people are covered.