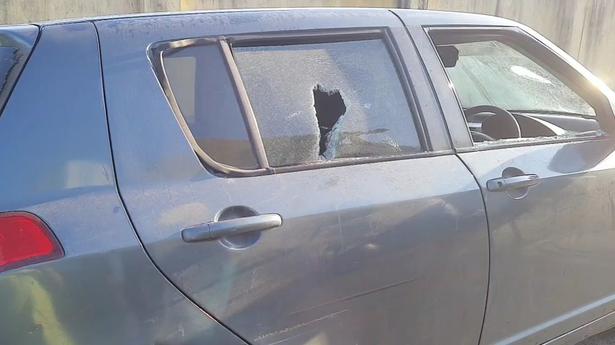 Four vehicles belonging to two BJP and a Hindu Munnani functionaries were damaged by unidentified persons at Pollachi in Coimbatore district in the early hours of Friday.

The incidents were reported hours after bottles filled with fuel were hurled at the BJP Coimbatore office and a textile showroom at Oppanakara Street in the city late on Thursday.

The police said miscreants damaged a car belonging to Ponraj, a BJP functionary in charge of Coimbatore south district, early on Friday. The car was parked in front of his residence at Azhagappa Layout at Kumaran Nagar, Pollachi. Windshields and door glasses were damaged.

The second car which was damaged belonged to BJP functionary Sivakumar at VSV Marriage Hall lane in Kumaran Nagar. According to the police, miscreants hurled a plastic cover filled with diesel at the car.

They damaged the windscreen and door glasses of the car, reportedly after their attempt to set the vehicle ablaze failed. Mr. Sivakumar told the police that two men were found escaping in a two-wheeler.

The police said that a Hindu Munnani functionary from Kumaran Nagar, namely Saravanakumar, has also complained that unidentified persons damaged two passenger autorickshaws belonging to his family, which were parked in front of the house, early on Friday.