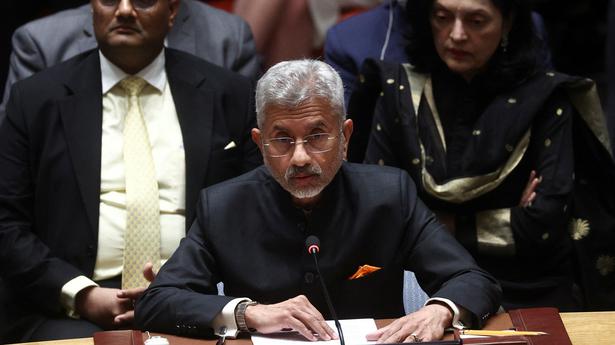 External Affairs Minister S. Jaishankar was among a group of Ministers, heads of government and representatives at the United Nations Security Council who expressed their concern on September 22 over the continuing conflict in Ukraine.

While he did not name Russia specifically, unlike the representatives of many other countries, Mr. Jaishankar said the conflict was a matter of “profound concern” for the global community.

“The future outlook appears even more disturbing,” he said, a day after Russian President Vladimir Putin announced a partial mobilisation of 300,000 potential combatants and a threat of nuclear action. The conflict has also put the Zaporizhzhia nuclear power plant at risk of damage, a matter than was raised by several speakers at the meeting on September 22.

“The nuclear issue is a particular anxiety,” Mr. Jaishankar said. Distant regions — especially in the global South —were feeling the conflict’s impact, he said, as he highlighted food and fuel shortages.

“We must therefore, not initiate measures that further complicates the struggling global economy,” he said.

“ And that is why India strongly reiterates the need for an immediate cessation of all hostilities and a return to dialogue and diplomacy,” he said, repeating Prime Minister Narendra Modi’s statement to Mr. Putin last week in Samarkand at the Shanghai Cooperation Organisation summit, “Now is not the era for war”.

Later in his speech, he said, again, that the need now was “to end this conflict in Ukraine and return to the negotiating table”.

Mr. Jaishankar also said that even during conflict, violations of human rights and international law were not acceptable.

“Where any such acts occur, it is imperative that they are investigated in an objective and independent manner. This was the position we took with regard to the killings in Bucha,” he said, referring to a massacre that took place in the suburb of Ukraine, which came to light in March 2022. Russia had denied it was responsible, saying the bodies were placed in Bucha after Russians vacated the area. A New York Times investigation using satellite images had concluded that the bodies were present weeks before the Russians left Bucha.

Days ago, a Ukrainian official said that most of the 146 bodies exhumed at Izium — a city in the east of Ukraine previously under Russian control — were those of civilians and some had marks of torture.

“Politics should never ever provide cover to evade accountability nor indeed to facilitate impunity. Regrettably, we have seen this of late in this very chamber when it comes to sanctioning of some of the world’s most dreaded terrorists,” Mr. Jaishankar said, presumably referring to China placing a hold, last week, on a U.S.-India proposal to sanction Pakistan-based LeT terrorist Sajid Mir at the UNSC’s 1267 Al-Qaeda Sanctions Committee.

Mr. Jaishankar said the Council should consider the signals it was sending by letting “egregious acts” go unpunished and that credibility required consistency.

Speaking earlier at the meeting, U.N. Secretary-General Antonio Guterres said that nuclear states should commit to not using nuclear weapons. He also criticized plans by officials in Ukrainian territory not controlled by the Ukrainian government, for referendums on whether to join Russia .

“ Any annexation of a state’s territory by another state resulting from a threat or use of force is a violation of the UN Charter and of international law,” he said. Mr. Guterres described the reports of the Office of the High Commissioner for Human Rights investigating abuses in the conflict region as “ a catalogue of cruelty”.