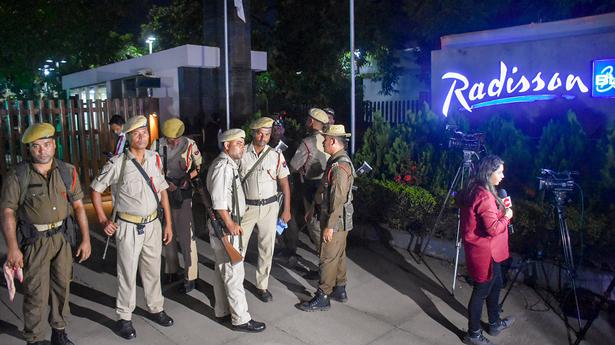 Rebel group, now in Assam, firm on its demand that the Sena should quit the MVA; Mr. Thackeray moves from the Chief Minister’s official residence in south Mumbai to his family’s Matoshri bungalow in suburban Bandra

Rebel group, now in Assam, firm on its demand that the Sena should quit the MVA; Mr. Thackeray moves from the Chief Minister’s official residence in south Mumbai to his family’s Matoshri bungalow in suburban Bandra

A revolt against Maharashtra Chief Minister Uddhav Thackeray by his second-in-command and senior Minister, Eknath Shinde, on Wednesday turned into a battle for the control of the Shiv Sena. In an emotional address to the people over Facebook, Mr. Thackeray said he would resign as Chief Minister and leave even the Sena’s top position if the party workers told him to do so to his face.

Later in the evening, Mr. Thackeray moved from the Chief Minister’s official residence in south Mumbai to his family’s Matoshri bungalow in suburban Bandra — a declaration he made in the speech. Thousands of Sena workers lined up on the road to Matoshri as a show of strength.

Mr. Thackeray, now COVID-positive, said: “We joined hands with Congress and NCP [Nationalist Congress Party], but it’s not they who are telling me to quit. The sad part for me is that my own people [Shiv Sainiks] have lost trust in me. I considered them mine; I don’t know about them. I am ready to resign. But come and meet me face-to-face. Tell me that I should quit on my face and I will resign.”

Mr. Shinde, who is in Guwahati with the MLAs supporting him, has been claiming the support of the majority of Shiv Sena MLAs and demanding that the Sena ally with the BJP, for the sake of Hindutva, and cut ties with the Congress and the NCP.

Earlier in the day, in a letter signed by 34 MLAs, four of them Independents, the Shinde group said the appointment of Ajay Chaudhari as the legislature party leader was illegal, and maintained that Mr. Shinde still held the position. The group claiming majority passed resolutions on the appointments of Mr. Shinde (as legislature party leader) and Mr. Gogawale (as chief whip).

The rebel group’s letter was sent to the Governor and the Deputy Speaker of the Legislative Assembly.

After Mr. Thackeray’s speech, Mr. Shinde tweeted with the hashtag #HindutvaForever: “While allies were getting stronger, Sena workers and Sena was systematically damaged. It is extremely important to quit from this unnatural alliance to save party and workers. It is important to take the decision now.”

The exodus from the Shiv Sena continued on Wednesday as Minister Gulabrao Patil and young MLA Yogesh Kadam, too, headed for Guwahati, while another MLA Dipak Kesarkar, said that the Sena should join hands with the BJP.

Earlier in the day, Mr. Shinde and his loyalists moved to Guwahati, from where he challenged the authority of a letter issued by Sunil Prabhu, Shiv Sena’s chief whip and Mr. Thackeray’s loyalist, in which he asked rebel MLAs to attend a meeting of party MLAs on Wednesday evening. Mr. Prabhu, in his letter, warned that the absence of an MLA would be considered as his voluntary decision to quit the party’s membership and he would face action under the sections to disqualify him.

The rebel group, however, challenged Mr. Prabhu’s authority and appointed Bharat Gogawale as the party’s new chief whip. In the letter, Shinde group claimed that the party cadres were dissatisfied for aligning with ideologically opposed parties like the Congress and NCP despite having fought the 2019 election in alliance with the BJP.

While passing the resolution, the signatories to the letter said that they had been subjected to lot of criticism for being part of “this corrupt Maharashtra government”. They reiterated that their leader Balasaheb Thackeray’s ideology was to provide a clean and honest government without compromising on the principles of Hindutva.

Following Mr. Thackeray’s public address, NCP chief Sharad Pawar along with Baramati Lok Sabha MP Supriya Sule, Maharashtra Housing Minister Jitendra Awhad and State unit chief Jayant Patil held a meeting with him. The NCP has called all its MLAs to Mumbai on Thursday. The Congress too has called all its MLAs to Mumbai and its leaders said that all 44 MLAs were with the party.

Kamal Nath, All India Congress Committee (AICC) observer in Maharashtra, stressed that there was complete unity within the Maharashtra Congress, adding that both his party and the NCP stood firmly behind Mr. Thackeray. “There is complete unity within the Maharashtra Congress. Forty-one of the 44 MLAs were present during my meeting with them. The others are en route. I have spoken with Uddhav Thackeray over phone and could not meet him personally as he has tested COVID-19 positive. I have assured him that the Congress will keep supporting the MVA,” he said. “I have spoken with Sharad Pawar. He, too, has said that the NCP fully supports the Thackeray government.”

“The BJP played the same tricks in Madhya Pradesh, Arunachal Pradesh, Karnataka and Jharkhand. Their corrupt politics of luring MLAs from other parties by offering money and political inducements is playing with the principles of our Constitution. I am confident that under Uddhav Thackeray’s leadership, unity will prevail within the Sena,” Mr. Nath said.

(With inputs from Shoumojit Banerjee in Pune)