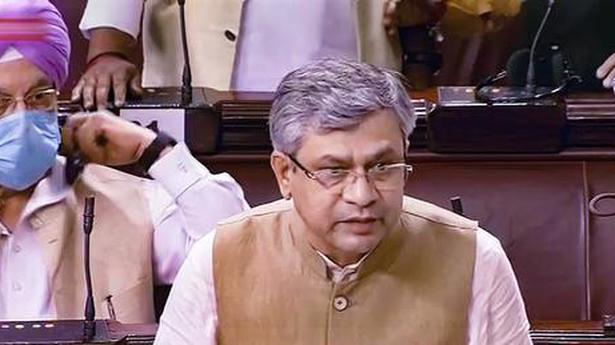 Rajya Sabha proceedings took an ugly turn on Thursday when Union Minister for Electronics and Information Technology Ashwini Vaishnaw rose to read out a statement on the Pegasus spyware episode only to have TMC MP Shantanu Sen snatch his papers and tear them. Minutes later, after the House was adjourned, TMC and BJP MP nearly came to blows.

Opposition members from many parties, including the TMC, Congress and the Left, were in the well of the House protesting against various issues when the incident took place. Their protests had led to two adjournments already, the first just a minute after the House convened at 11:00 a.m. and the second at 12:00 p.m.

Mr Vaishnaw struggled to read his statement in the din, when all of a sudden TMC MP Shantanu Sen snatched and tore the statement.

Undaunted, Mr Vaishnaw got another copy and tried to continue reading. But midway through the statement he tabled it and the House was adjourned.

“The Minister’s statement was full of contradictions and white lies. So one of our members snatched and tore it,” TMC chief whip Sukendu Sekhar Ray said.

Later, according to the TMC, after the House adjourned and the live transmission was switched off, Minister of Petroleum and Natural Gas and Housing and Urban Affairs Hardeep Puri gestured to Mr. Sen asking him to come to his seat.

“When I went to Mr. Puri, he started threatening and abusing me. I was gheraoed by the BJP MPs. Mr Puri was about to assault me, thank God my other colleagues noticed and rescued me in time,” Mr Sen alleged.

The BJP, however, has alleged that it was Mr. Sen who attacked Union Minister. Sources in the BJP said they will be moving a motion seeking suspension of Mr. Sen.

TMC’s parliamentary party leader Derek O’Brien said the party wants a “structured debate” on the issue of snooping where Prime Minister Narendra Modi should reply to the Opposition’s questions. He said, “Our straight forward question is — did you [the government] or did you not use the Pegasus spyware.”

He added that the TMC will not let the government sweep the issue under the carpet.

Rajya Sabha, unlike the Lok Sabha, can seek clarifications on a Minister’s statement. In Thursday’s din, however, that opportunity was lost. “When the government is using military grade spyware, the supposition that this is a question that the IT Minister can answer is preposterous,” Mr O’Brien said. He added that only a few members could seek clarifications and that too for a very short time.