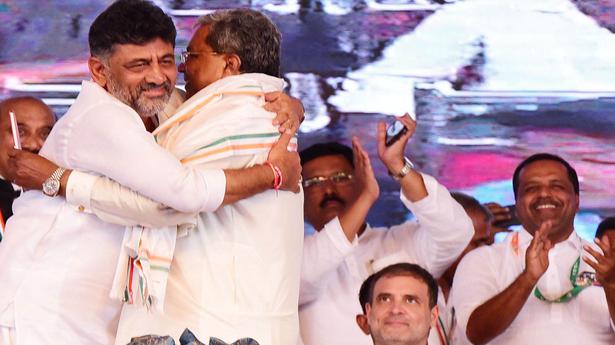 With nine months left for the Assembly elections, Karnataka Congress sought to use the mammoth 75th birthday event of Leader of the Opposition Siddaramaiah at Davangere on Wednesday to send out a message of unity among its leaders.

Showering praises on Mr. Siddaramaiah’s five-year governance and KPCC president D.K. Shivakumar’s organisational skills — the two leaders who are seen as being at loggerheads and rival contenders for the Chief Minister’s post — MP and former AICC president Rahul Gandhi said, “The State Congress stands united to fight against the BJP’s misrule and unseat it from power.”

Later, Mr. Siddaramaiah too tried to play down the bickering between the two leaders, terming it as a creation by a section of the media. “There is no difference between me and Mr. Shivakumar. But a section of the media created it. We are united and united we fight against the BJP and bring back the Congress to power,” he said.

There was no mention “future Chief Minister” in the event attended by lakhs, though the programme was a clear show of Mr. Siddaramaiah’s strength.

During the party’s Political Affairs Committee meeting in Hubballi on Tuesday night, in which Mr. Gandhi too was present, a clear message was sent out to the leaders that public utterances on the party’s internal matters and leadership issue would not be tolerated.