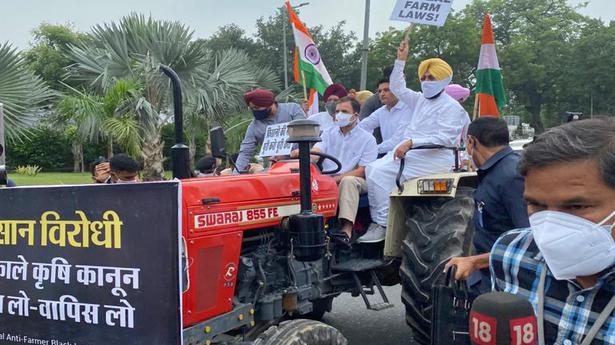 Former Congress president Rahul Gandhi, accompanied by his parliamentary colleagues, drove a tractor to Parliament on Monday to express solidarity with the protesting farmers and demand the repeal of the three farm laws.

“We have brought the message of farmers to Parliament. A discussion is not allowed inside the House and the farmers are being suppressed. That’s why we are here and they [the Centre] will have to take back these black laws,” he said.

Besides extending support to the farmers in their fight against the farm laws, the tractor ride to Parliament was aimed at highlighting the cause of the farmers’ unions that have been protesting just outside Delhi borders over eight months now.

“These laws are aimed at helping only two-three industrialists. The entire country knows for who and whom these laws have been brought about. These laws are not for the benefit of farmers and that is why they have to be withdrawn,” Mr. Gandhi stated.

His tractor drive from Moti Lal Nehru marg to one of the peripheral gates of Parliament had taken the police by surprise, as the area was under Section 144 of the Criminal Procedure Code (CrPC) and no gathering of more than four people is allowed.

Congress chief spokesperson Randeep Surjewala and Youth Congress chief BV Srinivas, along with a number of party leaders, were detained by the police outside Parliament and taken to the Mandir Marg police station by bus amid sloganeering for the withdrawal of the farm laws.

“We will not be cowed down by such actions. This struggle will continue under the leadership of Rahul Gandhi and we will not allow the Modi government to hand over the rights of 62 crore farmers to three-four industrialists,” Mr. Surjewala told reporters after his detention.

The police detained around eight Congress workers and seized the tractor. A senior police officer said tractor entry was not allowed in New Delhi area as per traffic rules. The tractor had been taken to the Mandir Marg police station. It did not bear any registration number.

“They have ordered detailed investigation to find out how the tractor reached near Parliament when Section 144 of CrPC has been imposed in the area near Parliament,” said the officer.

Due to the ‘farmers Parliament’ at Jantar Mantar, more than 2,000 security personnel have been deployed in the area.