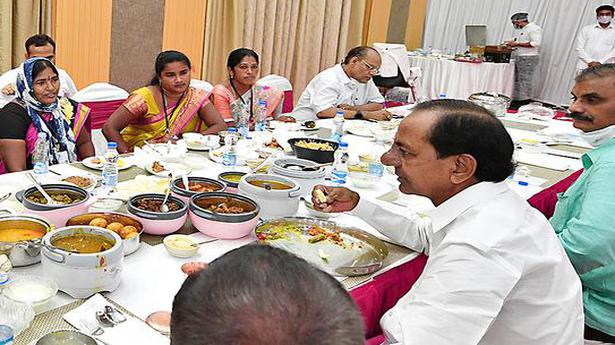 Chief Minister K. Chandrasekhar Rao has said that the State government will extend reservations to SCs in allotment of licensed business like rice mills, fertilizer, medical and liquor shops.

Addressing an orientation programme on `Dalit Bandhu’ for about 450 SC people from various villages in Huzurabad Assembly constituency where the programme will be implemented on a pilot basis, Mr. Rao asked officials to identify similar economic generation activities where reservation can be extended to SCs.

The eight-hour meeting which was also attended by MLAs and MLCs of TRS belonging to SCs, Mr. Rao said the government will extend investment support to eligible beneficiaries in industrial, agricultural and employment generation sectors. They include purchase of power tillers, harvesters, autorickshaws, tractors, poultry farms, tent houses, dairy farming, oil mills, flour mills, brick kilns, hotels and others depending upon their preferences.

Mr. Rao said the beneficiaries of Dalit Bandhu will be provided ID cards that will have bar coded electronic chips which can be used to pass on information about the implementation of the programme.

The meeting was marked by an interactive session where the participants expressed how they proposed to invest the money under the scheme.

The public representatives who were present clarified their doubts with Mr. Rao. An illustrative note on business and service activities in rural and urban areas that can be explored was circulated to participants.

Mr. Rao initiated the meeting stoking the hidden strength in Scheduled Castes and how it can be harnessed for their economic development. He asked the SCs to emerge as a business community making use of the programme.

They should become money lenders to other communities in villages.

Dalit Bandhu should run concurrently with resolving land issues of SCs and creation of basic infrastructure in their residential areas. The scheme was aimed to liberate SCs not only from economic but social injustice and enhance their self-respect, he said.

He added that the success of the programme in the State depended on the result from the efforts put in at Huzurabad.

He appealed to SCs to withdraw police cases between themselves. They should work with mutual cooperation.