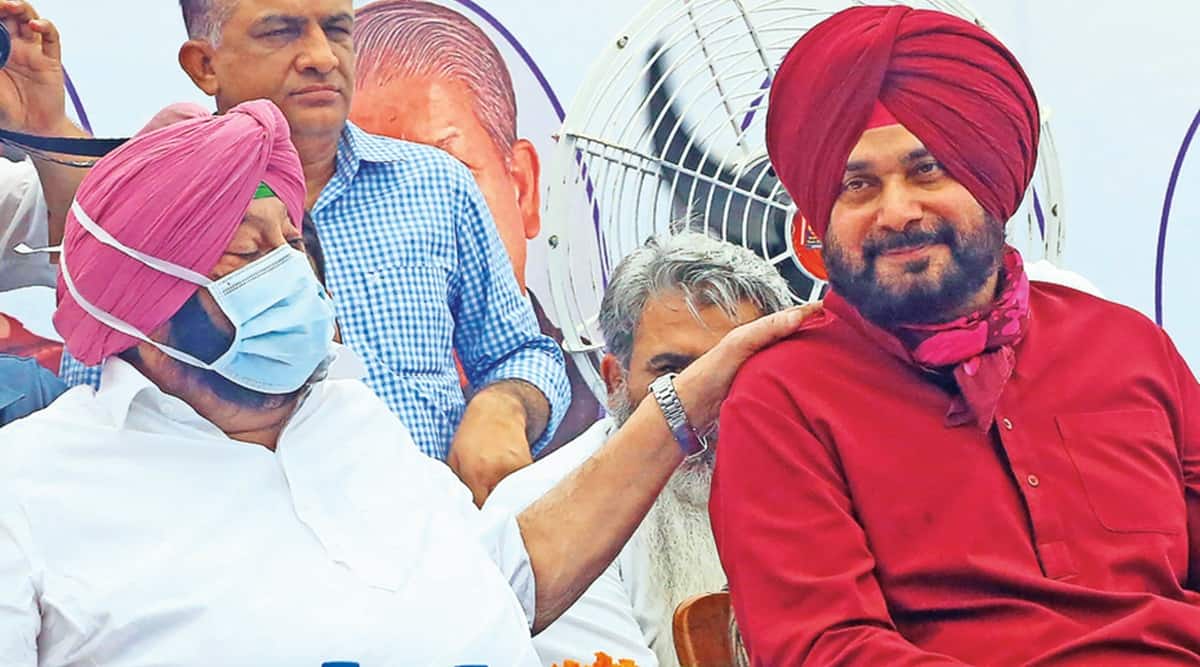 The occasion was the installation of the new state team. Sidhu greeted senior leaders by touching their feet or shaking hands with them, but ignored Amarinder, who sat nearby.

Sidhu could also be seen chatting with outgoing PCC chief Sunil Jhakhar as Amarinder addressed the audience, and the CM had to call out to get his attention.

In his speech, Amarinder mentioned Sidhu several times, even crediting the latter’s father for initiating him into politics, and asserted that they would work together. But when it was his turn to speak, Sidhu barely mentioned the CM, while starting his address by acknowledging the “honourable manch”, avoiding mentioning anyone by name.

In Delhi, asked about the Punjab Congress crisis, Rahul Gandhi said it was over. “It is resolved. You can see,” he said.

Sidhu called himself a “small worker”, to loud cheers by partymen who made no attempt at social distancing, and said every worker of the Congress had become party president with his elevation.

In an indirect attack on the Amarinder government, he said Punjab is looking for “answers”, and that he himself never hankered for posts. “I have discarded posts, Cabinet berths. Farmers are at this point sitting on the borders of Delhi, teachers and doctors are on the roads, conductors and drivers are on dharnas… These are the issues. The issue is the beadbi (insult) of my Guru. This presidentship is the hope of people that their issues will be sorted. Unless this is done and justice delivered to my Guru, this presidentship means nothing.”

On power purchase agreements, another issue he has been raising, Sidhu asked why the state should buy power for Rs 18 per unit, adding, “CM sahib, we have to sort out the issues. Only then we are Sikhs of the Guru.”

This was the only time he mentioned Amarinder, even as he talked about Cabinet ministers Sukhbinder Sarkaria, Sukhjinder Randhawa, general secretary in-charge of Punjab Harish Rawat and former Chief Minister Rajinder Kaur Bhattal.

Amarinder, who spoke just before Sidhu, said, “Assi dono ikatthe chalange (We will walk together).”

Rawat lauded Amarinder’s “magnanimity” and referred to him as a “lion”. “A lion never gets old. He always remains a lion. A lion is a king at heart.”