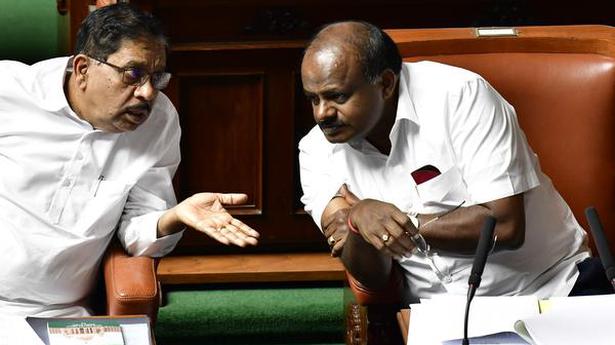 Party believes its leaders were under surveillance during the political turmoil in Karnataka in July 2019, which ended in collapse of the JD(S)-Congress coalition government

Congress legislators of Karnataka have decided to organise a rally from Vidhana Soudha to Raj Bhavan on July 22 in protest against alleged surveillance of phone numbers of key Congress and JD (S) leaders using Pegasus spyware.

Congress MLAs, MLCs, MPs and other leaders would participate in the protest march and are expected to submit a memorandum to Governor Thawar Chand Gehlot seeking a probe into the matter.

Following a direction from Congress Legislature Party (CLP) leader Siddaramaiah, CLP Secretary E. Tukaram issued a communication to all legislators instructing them to take part in the protest march.

Meanwhile, KPCC president D.K. Shivakumar tweeted: “It’s not our phones; it’s our democracy which has been hacked! We have to reclaim the nation from this autocratic behaviour. Hacking into people’s phones and private lives, using that information for politics, at tax payers’ expense… these things don’t happen in democracies”.

It was reported that during the political turmoil in Karnataka in July 2019, which ended in collapse of the JD(S)-Congress coalition government and the BJP coming to power, the phone numbers of key leaders in the coalition and their associates ‘were selected as possible targets for surveillance’, according to a global investigation named ‘The Pegasus Project’.

Phone numbers of the then deputy chief minister Dr. G. Parameshwara, personal secretaries of the then chief minister H.D. Kumaraswamy, former chief minister Siddaramaiah and security personnel of former prime minister H.D. Deve Gowda were selected as possible targets, according to The Wire’s review of numbers that were of interest to the Indian client of NSO Group, a company based in Israel that developed the Pegasus spyware.