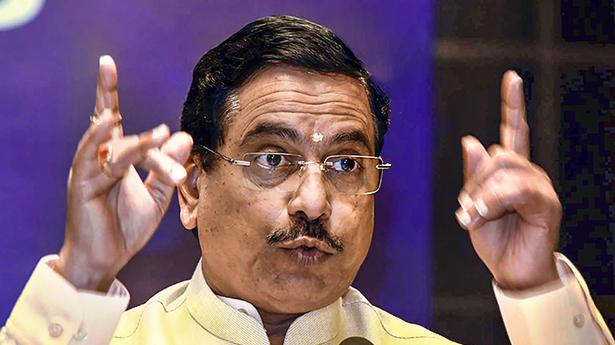 “Opposition leaders @Jairam_Ramesh & @GauravGogoiAsm peddled some lies at a Press Conference. #MonsoonSession was not adjourned 4 days in advance, as is being claimed but only 2 days ahead of schedule. This decision was taken on the request of MPs including those from Opposition,” Mr. Joshi said in a series of tweets.

“Opposition’s propaganda is discussion but agenda is disruption and boycott. They could have raised any issue through calling attention, Rule 377, zero hour & question hour, etc. But they walked away during discussion on Price rise which they were demanding since the beginning,” he added.

Earlier in the day, Mr. Ramesh, who is the Congress Whip in Rajya Sabha and Mr. Gogoi, the party’s deputy leader in the Lok Sabha, addressed a joint press conference in which they charged the government of not having an agenda for the Monsoon Session.

Calling the session “highly disappointing,” the Congress leaders said the Narendra Modi government did not have the appetite to run proceedings till the scheduled date of August 12.

“It was also extraordinary that one-and-a-half days of proceedings were disrupted by treasury benches which kept insisting on an apology from Congress president Sonia Gandhi for remarks made by Leader of the Party in Lok Sabha who had already apologised for his statement both verbally as well as in writing,” Mr. Ramesh said.

“The government had no business in its agenda. The floor management was not good. Earlier the Prime Minister used to ignore Parliament and now even the Ministers are doing so,” he added.

The Congress leaders said the government listed 32 Bills at the start of the session, but managed to pass only seven in Lok Sabha and five in Rajya Sabha.

Mr. Gogoi added that the government knew about the holidays beforehand and could have planned the schedule of the Monsoon Session accordingly.