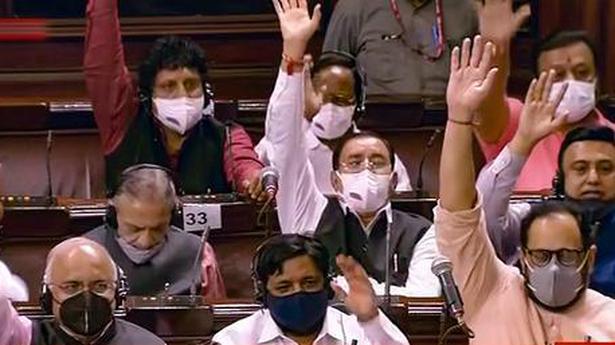 Both the Houses of Parliament on Tuesday saw multiple adjournments on Tuesday, the Lok Sabha as many as 10, before being adjourned for the day as the Opposition continued with its protests against the government on the Pegasus issue and the three controversial farm laws.

The Rajya Sabha, like the Lok Sabha on Monday, managed to pass the Marine Aids to Navigation Bill, 2021 with a voice vote amid sloganeering and protests by the Opposition. The Lok Sabha cleared the Factoring Regulation Bill, 2020 and the National Institutes of food Technology and Management Bill, 2021 in a similar manner on Monday.

Rajya Sabha chairperson M. Venkaiah Naidu, amid disruptions during Zero Hour, said he would not be forced “like this” though “undemocratic method” to give in to Opposition demands.

Lok Sabha Speaker Om Birla told Opposition members who kept up protests in the House through all its 10 adjournments, that MPs shouldn’t be “competing to raise slogans” and that they should raise issues pertaining to people.

Protests in the Lok Sabha started soon after members paid homage to Anerood Jugnauth, former Prime Minister of Mauritius and Kenneth Kaunda, the first President of Zambia. While members of the Congress, CPI, CPI(M) and the Trinamool Congress (TMC) were protesting over the snooping row, the Shiromani Akali Dal (SAD), Bahujan Samaj Party (BSP), and the Samajwadi Party (SP) raised slogans against the three farm laws. Despite assurances by Mr. Birla and subsequent Chairs Bhratruhari Mahtab and Rajendra Agarwal that members would be given ample opportunities to raise issues, the protests continued.

Agriculture Minister Narendra Singh Tomar said there were 15 questions with regard to agriculture listed for Question Hour but that the disruptions had made it impossible for these to be put to the Minister.

Minister of State for Parliamentary Affairs Arjun Ram Meghwal appealed for calm to no avail. Some attempts were made during the day to allow for mentions under rule 377, where members raise issues of public importance, but frequent adjournments made it a truncated affair. Placards and sloganeering continued in both Houses with equal intensity.

Opposition leaders are firm that there should be an enquiry ordered into the Pegasus issue and the three farm laws should be repealed.

Long after the Lok Sabha had adjourned, two Congress MPs from Punjab — Ravneet Bittu and Gurjeet Singh Aujla — continued to protest on the floor of the House demanding the scrapping of the farm laws.

“They were persuaded to leave the House a little before 9 p.m.,” a Lok Sabha official said.