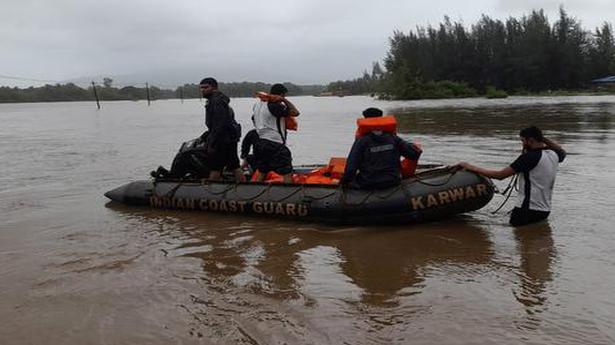 Heavy rains on Friday led to flooding and landslides in many parts of Karnataka throwing life out of gear.

The India Meteorological Department (IMD) has issued a red alert for Kodagu which has been the most affected during monsoon in the last few years. The IMD has also forecast heavy to very heavy rains over coastal region, south interior and north interior Karnataka during the next 24 hours.

Rail and road networks were disrupted in some places. A landslide caused the derailment of train no. 01134 Mangaluru Jn-Chhatrapati Shivaji Maharaj Terminus Express Special in the Dudhsagar-Sonaulim section, but there were no casualties.

There was inundation in Belagavi, Dharwad, Uttar Kannada, Gadag and Haveri on Friday, besides landslides in the Hubballi Division of the South Western Railway. The Belagavi-Kolhapur National Highway was closed and vehicles diverted.

The Malnad region too was hit. Several residential localities in Sagar, Thirthahalli towns were flooded and the vehicular movement badly affected. A farmer at Kyatanabeedu in Chikkamagaluru taluk died after a shed collapsed on Friday following night-long heavy rains.

The State Disaster Response Force personnel rescued at least six persons in Belagavi district. Meanwhile, six youths from Hubballi, who had gone missing on Thursday near Shirle Falls of Uttar Kannada district, were traced on Friday.

The situation aggravated with Maharashtra opening the crest gates of Koyna Dam. The outflow from the dam was stepped up and was at the rate of 20,000 cusecs and could increase to 80,000 cusecs if the rains continued in the Satara region. The vehicles bound for Maharashtra and north India were diverted.

The traffic on two major ghats that connect Dakshina Kannada with the rest of the State has been affected. Shiradi Ghat on National Highway 75 has been closed for all types of vehicles.

The inflow into reservoirs has been increasing, forcing the officers to issue warning to people residing in the low-lying areas. Tunga, Bhadra, Hemavathi, Yagachi rivers are in spate. The inflow into Linganamakki dam stands at 2,42,000 cusecs at 11 a.m. on Friday.

Meanwhile, the inflow into the Narayanapura dam across the river Krishna, increased to 1.72 lakh cusecs and the outflow was at the rate of 2.58 lakh cusecs.