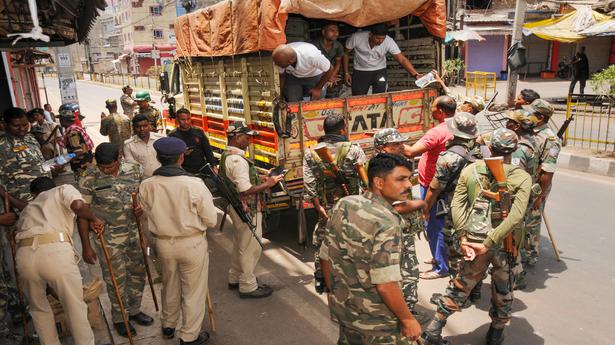 Hours after putting up the posters on Tuesday, police had taken them down from various parts of the State capital, citing “technical flaws”

Hours after putting up the posters on Tuesday, police had taken them down from various parts of the State capital, citing “technical flaws”

A day after Jharkhand police put up posters carrying photographs of those allegedly involved in the recent violent protests in Ranchi, the State’s Home Secretary Rajiv Arun Ekka on Wednesday evening sought an explanation from the SSP over the “unlawful” act.

Hours after putting up the posters on Tuesday, police had taken them down from various parts of the State capital, citing “technical flaws”. The law enforcers had also said the errors would be rectified and the posters released again.

“This is not lawful and is against the order dated March 9, 2020 passed by Hon’ble High Court, Allahabad…,” the letter by Mr. Ekka, the Principal Secretary, Home, Jail and Disaster Management Department, said.

“… The Hon’ble Court had directed the State of Uttar Pradesh not to put up posters containing personal information of persons without legal authority on the roadside. This matter is nothing but an undue interference in the privacy of the people. Therefore, it is a violation of Article 21 of the Constitution of India,” it added.

The police had released the posters of around 30 people allegedly involved in the violent protests, seeking information about them.

The move came a day after Governor Ramesh Bais summoned DGP Neeraj Sinha and other senior officials at Raj Bhavan, and raised questions as to why preventive measures or action to disperse the crowd were not taken during the agitation.

Police said that 29 people have been arrested so far in connection with the incident.

Tension still prevailed in the State capital with prohibitory orders under Section 144 of CrPC in force in parts of the city. Security deployment has also been augmented in Ranchi.