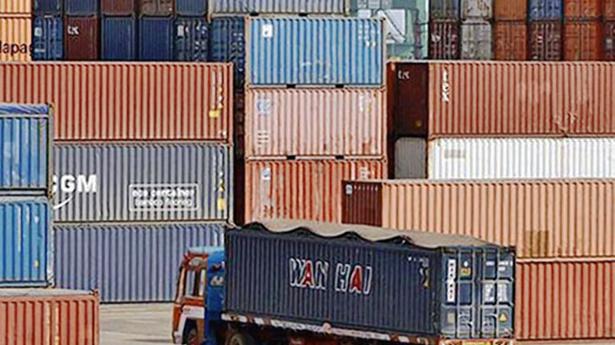 Net invisible receipts were higher in 2021-22 on account of an increase in net exports of services and net private transfer receipts though net income outgo was higher than a year ago.

“On a year-on-year basis, although gold imports halved, and the services trade surplus rose, this improvement was dwarfed by the widening of the merchandise trade deficit led by imports of commodity inputs such as crude oil, coal and fertilisers, as well as electronic goods,” Ms. Nayar said.

The merchandise trade deficit narrowed to $54.5 billion in the March quarter compared with a deficit of $60.4 billion in the previous quarter. The deficit in the same quarter a year earlier, however, had stood at $41.7 billion.

Net services receipts increased, both sequentially and on a year-on-year (y-o-y) basis, on the back of a rise in net earnings from computer and business services. Private transfer receipts, mainly representing remittances by Indians employed overseas, increased to $23.7 billion, up by 13.4% from their level a year earlier.

Net outgo from the primary income account, largely reflecting net income payments on foreign investment, decreased sequentially as well as on a y-o-y basis. In the financial account, net foreign direct investment (FDI) at $13.8 billion was higher than $2.7 billion in Q4 2020-21.

Net foreign portfolio investment recorded an outflow of $15.2 billion – mainly from the equity market. Net ECBs to India were lower at $3.3 billion in Q4 2021-22 as compared with $6.1 billion a year earlier.

There was a drawdown of $16 billion in the foreign exchange reserves (on a BoP basis) as against an accretion of $3.4 billion in Q4 2020-21, according to the data.

(With inputs from PTI, Reuters)