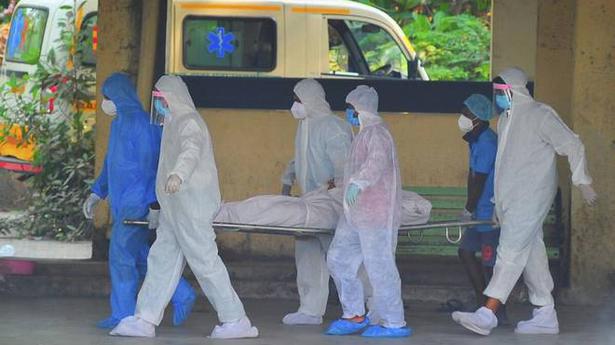 The number of “excess deaths” registered by the Civil Registration System (CRS) in Himachal Pradesh ever since the COVID-19 pandemic hit (from April 2020 to May 2021) was 6,081, which is 1.9 times the official reported figure of 3,127 COVID-19 deaths for the same period.

The figures were arrived at from data on deaths registered month-wise in the online CRS from January 2018 to May 2021 in Himachal Pradesh and accessed by The Hindu. Not all excess deaths could be related to COVID-19, but a bulk of them will be, during the pandemic period.

The excess deaths were calculated as the difference between the registered deaths in the pandemic period and the average number of deaths registered in 2018 and 2019 for the same months. The excess deaths being a lower multiple in 2021 could either be a reflection of a lag in registration of deaths or a more accurate count of the dead due to COVID-19 and related factors. But the CRS-2019 report mentions that 92.1% of the death registrations are completed within 21 days of the occurrence in Himachal Pradesh.

The report also estimates that around 86.4% of the total deaths in the State were registered. This suggests that the excess death count and therefore the multiple could go up a bit more if all deaths are accounted for in later years compared with previous ones.

Nevertheless, even if it is a slight underestimate, the estimated undercount factor of 1.9 for the State is lower than that of Haryana (7.3) and Madhya Pradesh (23.8) in the north, Andhra Pradesh (17.9), Tamil Nadu (6.4 adjusted to 4.4 if CRS COVID-19 tally is considered) and Karnataka (4.3) in the south, and only higher than that of Kerala (0.42 based on reconciled COVID-19 tally) if the same baseline is considered (deaths registered in 2018 and 2019).

When asked about the discrepancy between the CRS data and the official COVID-19 death toll, Janak Raj, senior medical superintendent at Indira Gandhi Medical College in Shimla, told The Hindu that the discrepancy based on excess deaths could be because of the ‘non-hospital’ deaths (deaths at home).

“People, who died at homes, could be the ones who denied that they had COVID-19, be it intentionally or unintentionally. Also, there was a negative publicity surrounding COVID-19 treatment at hospitals. Besides, social stigma associated with COVID-19 seems to be another reason that discouraged people to visit hospitals for treatment. There was a sense of fear that if one died of COVID-19, there would be a problem in cremation, besides people will not visit one’s home. There could be instances that with such fear in mind, some people who fell critically ill at home and didn’t visit hospitals for treatment and eventually died,” Dr. Raj said.

“Majority of deaths had been within 24 hours of hospitalisation. Those patients, who managed to reach hospitals at an early stage, survived. It was mostly the critical patients who intentionally or unintentionally delayed visiting hospitals that succumbed to COVID-19,” he added.

Commenting on Kangra district registering the highest estimated excess deaths, Dr. Raj said it is the most populous district in the State and that could be why numbers were probably on the higher side. “Also, the district has difficult geography and topography even as the hospitals here cater to the catchment area of neighbouring Chamba district as well,” he said.

(Data compiled and aggregated by Pratap Vardhan. With inputs from Vikas Vasudeva in Chandigarh, graphics support from Vignesh Radhakrishnan)