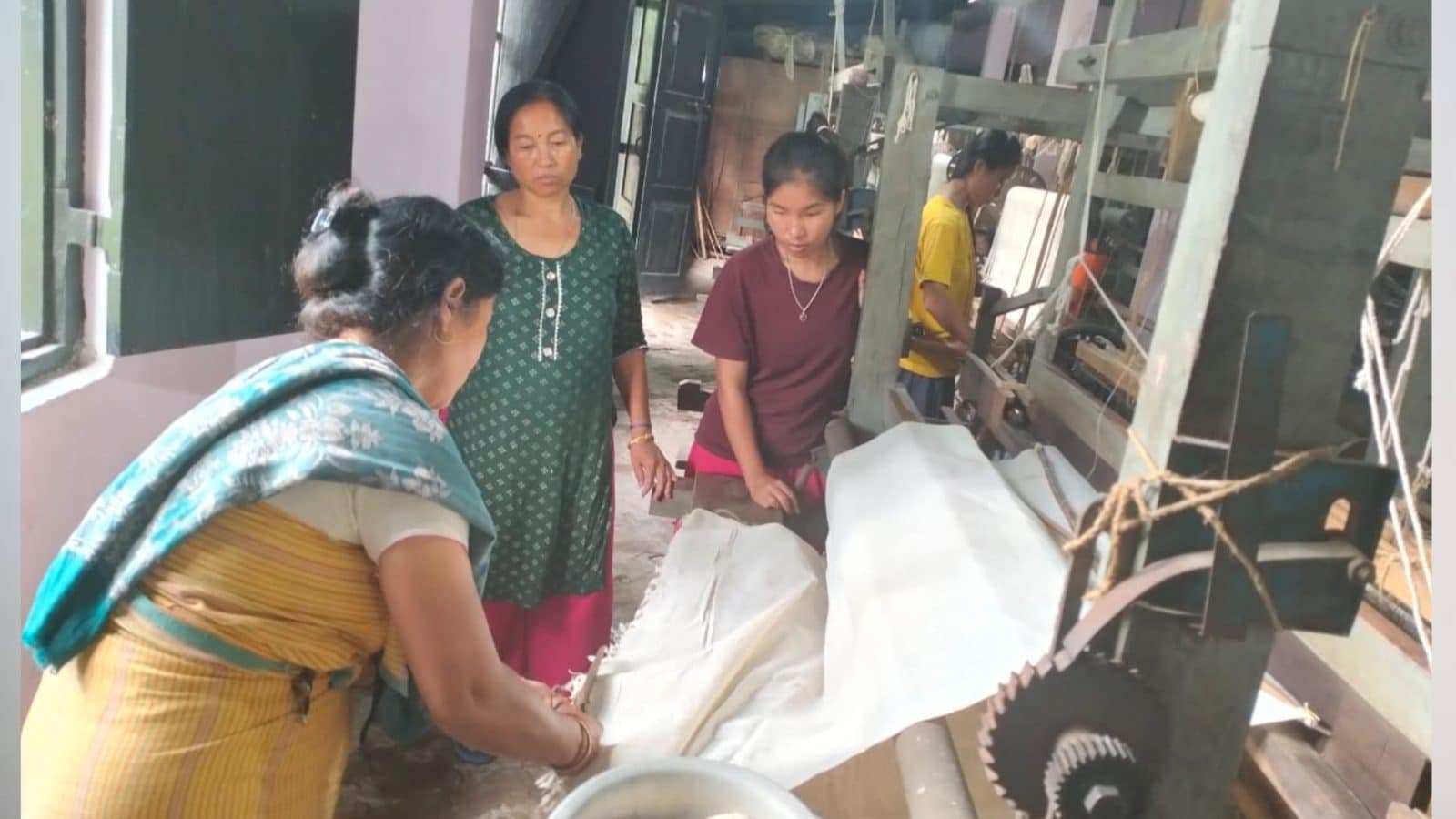 Some of the former cadres learn weaving. (Pic: News18)

These women are mostly from remote places in Karbi Anglong, Biswanath Chari Ali and Dima Hasao. They had surrendered and signed an agreement with government of India and government of Assam and disbanded themselves

A group of 26 women from a batch of ceasefire cadres of different militant groups in Assam have chosen threads over guns. The women, who were once active cadres of various militant groups like PDCK, DNLA, UPLA and operated rifles while hiding in dense forests of Assam, are now busy weaving traditional garments for various tribes of Assam.

These women are mostly from remote places in Karbi Anglong, Biswanath Chari Ali and Dima Hasao. They had surrendered and signed an agreement with government of India and government of Assam and disbanded themselves.

In order to rehabilitate them, Assam Police organised a special training to teach them weaving traditional garments.

Speaking exclusively to CNN-News18, ADGP Hiren Nath said: “Total 1,926 former Karbi militants have surrendered so far. It is our duty to rehabilitate them. This is why we provided a 3-month training to the 26 women at KVIC weaving centre at Kumarikata in Tamulpur district. Their training has recently been completed. The main objective is to make them capable of not just getting employed but also generate employments. This training has also brought a drastic mental transformation in them.”

The officer added that since these women are from various militant groups, when they first surrendered and came, they were extremely rigid.

“In the beginning, they hardly spoke to instructors and were very reserved with the principal of the institute. Earlier they used to handle weapons and led a very isolated and tough life. So initially, they faced a number of problems. However, towards the end of the training, they were able to weave garments from all the knowledge they received. They even presented gifts to guests in the closing ceremony. They were not just talking to each other but also singing, dancing , playing and going for picnics together.” he added

HOW FROM GUNS TO THREADS

The rehabilitation programme gave them an opportunity not just to learn a new way of earning and living but also a prosperous life. Their new routine was also very different from their rigorous routine in the forests.

The principal of the training institute, Dulal Saha, said: “All the 26 women cadres were going through a 3-month training. There were following a strict routine wherein they had to wake up 4am, engage in helping each other at kitchen for breakfast as per their mess duty. Later, they engaged and learnt about weaving traditional garments. Around 4pm, their day winded up. At noon, they had lunch after chanting bhojan mantra. Throughout the day, the women dedicated four hours in the morning and four hours in the afternoon at learning weaving.”

All 26 women were served vegetarian food during their their training.

Dulal Saha added, “Their food habits were very different earlier since they were in militant groups. But this is Gandhi’s institute, so we only provide vegetarian food here. It was a little difficult to deal with them in the beginning but we managed to teach them about Gandhiji’s principles. They eventually learnt the ways and changed entirely.”

Major transformations have been observed in these women after their training in Kumarikata. Some of them are even planning to have their own loom.

Speaking to CNN-News18, one of the former cadres, said: ” I was a UPLA cadre. I am from Karbi Anglong. I have recently taken the 3-month training of weaving clothes. Now, we are planning to start a weaving industry here. All the UPLA-surrendered women cadres, we have called for a meeting soon to decide future course of action.”

Assam government has given away a fixed deposit of Rs 4 lakh to 22 out of 26 cadres for rehabilitating themselves to work on the day they surrendered at Srimanta Sankardev Kalakshetra in presence of Chief Minister Himanta Biswa Sarma. However, they will only be able to draw that money 3 months from now. For now, they are eligible to take a loan of Rs 3 lakh 20 thousand per head .

Speaking further on that, ADGP Nath said: ” We have given them training, government has given them financial support. Now, they can easily come together to start a weaving industry.”

He further urged all youths still engaged in militancy to end extremism and take these women as example and come back to mainstream  life.