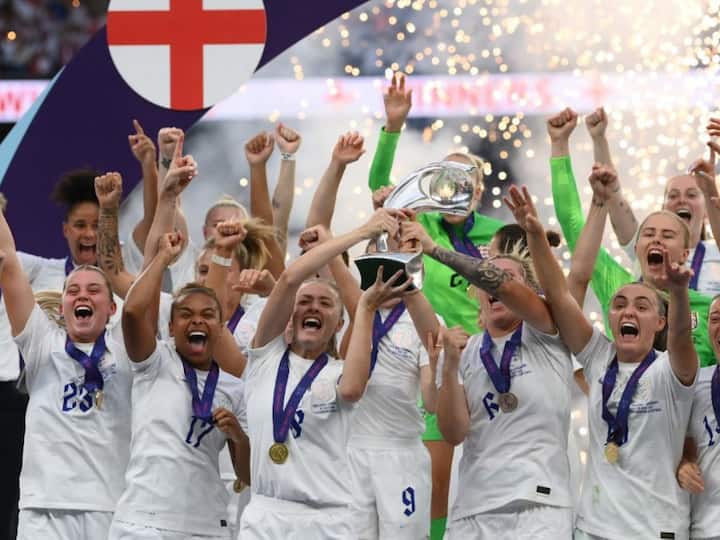 England ended a 56-year wait for an international trophy as the Women’s team won the UEFA Euro Championship for the first time, sending the whole nation into raptures. In front of a record-breaking 87,192 fans at the iconic Wembley Stadium, the home favourites defeated Germany 2-1 after extra time, drawing the curtains on a spectacular month-long tournament that has certainly amplified the popularity of women’s football.

Chloe Kelly scored the decisive goal in the 110th minute, followed by an iconic Brandi Chastain-like moment of celebration, to firmly etch herself into the history books.

Journey To The Cup

Throughout the tournament, Germany and England firmly established themselves as the best of the crop and it was only befitting that these two nations played it out in front of a sell-out Wembley crowd for a chance to lift the coveted trophy.

The local favourites began the tournament quietly with a slender 1-0 victory over Austria but substantiated their credentials after demolishing Norway 8-0 and Northern Ireland 5-0 in the following two matchdays. Their first major test arrived in the quarterfinals when they were pitched against the pre-season favourites – Spain.

After being outplayed for most of the game and going a goal down, England managed to take the match into extra time, with Georgia Stanway coming up with a goal-of-the-tournament-worthy match winner. The Brits followed this up with another statement victory against Sweden – dispatching them with a 4-0 victory in the semi-finals.

On the other hand, Germany had a steady yet assured path towards the finals and did not concede a single goal until the semi-finals. Drawn in the same group as Spain, Denmark, and Finland, the Germans outlined their intent after finishing top of their group with maximum points, defeating their Spanish rivals 2-0 in the process. Led by their fearsome striker Alexandra Popp, the Germans overcame Austria and France in the knockout stages and booked themselves a berth in the finale.

With the away supporters comprising only 3000 of the stadium’s total attendance, defeating the home team was certainly shaping up to be a daunting task. The Germans had their work cut out when Popp injured herself in the warm-up before the game – robbing one of the best players of the tournament a chance to grace the field.

England’s manager Sarina Wiegman – who coached the Dutch to victory at the last edition of the tournament – opted for the same set of starting XI as their previous five matches. This setup had proven to be largely successful throughout the tournament and made sense not to tinker with it before such a huge match.

England enjoyed larger spells of possession during the match and crafted clear-cut chances on a more frequent basis. However, the German team seemed unfazed by their opposition and felt comfortable letting England have more of the ball, instead they used their physicality to break up England’s attacks and then play on the counter. The quality of their bench has been a crucial point of difference for the home team previously in the tournament and it proved to be the source of inspiration yet again. Ella Toone – brought on in the 55th minute – latched onto a beautiful lobbed pass from Walsh and chipped the ball delicately over Frohms to open the scoring.

The Germans kept their wits about them and continued to press for a goal and were soon rewarded for their efforts when Lina Magull finished off a clever team move to score the equalizer. With the match dragged on into extra time, another England substitute made the difference as Chloe Kelly drilled home a loose ball in the box after a corner to launch her team in front with only minutes left to play. While England held on to complete a brilliant championship win on their home soil, the Germans too must be lauded for putting up a brave fight and for the exceptional football they’ve played over the month.

While this tournament was a record-breaker, in many ways, for women’s football, with unprecedented match attendance figures as well as TV viewership, there is still a long way to go. The average attendance stood at 18,544 and would easily be dwarfed by the numbers of a men’s tournament of such a level.

While a few countries have taken positive steps and awarded equal pay contracts to both men’s and women’s teams, the situation with the other national teams as well as the club teams remains a lot to be desired.

The Euros have helped a lot of these players become household names and hopefully this increased popularity results in greater match attendance numbers as well as better broadcast deals.

The money pumped in will surely fast-track the development of women’s football, right from the academy levels, and catapult the sport to new heights because at the heart of everything, it’s not men’s or women’s football, it’s just football.