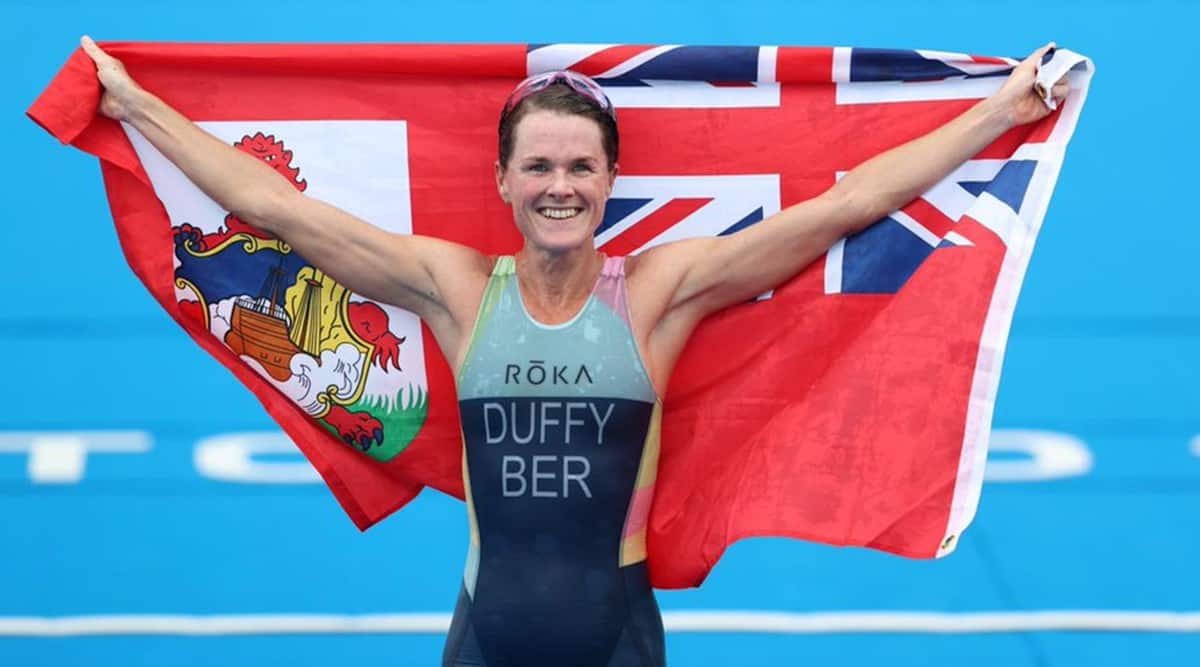 Bermuda, an island where British troops first popularised wearing half pants to beat the heat, entered the Olympic record books when 33-year-old Flora Duffy won the women’s triathlon gold in one hour, 55 minutes and 36 seconds.

62,278 hearts swelled with pride when Duffy finished the 10 kilometre run, the last of the three endurance segments after swimming, cycling and then pumped her hands in the air.

The number of people in Bermuda is about 45,000 lesser than the 1.07 lakh who celebrated in Grenada when Kirani James stunned the Americans to win the 400 metres gold at the London Games nine years ago.

Bermuda is now the least populated country to win an Olympic gold.

Duffy and men’s rower Dara Alizadeh are the only two athletes from the north Atlantic and British Overseas Territory at the Tokyo Olympics.

“I think (the medal) is bigger than me. It’s going to inspire the youth of Bermuda and everyone back home that competing on the world stage from a small island is really possible,” Duffy said.

And to think their biggest medal hope since boxer Clarence Hill, a bronze medallist at the 1976 Montreal Games, had quit the sport after a Did Not Finish against her name at the Beijing Games.

Much before the triathlete wrote her name and Bermuda’s into the history books of Olympic sport, she was a cautionary tale.

Post-Beijing, Duffy’s career went off the rails. She was diagnosed with an eating disorder, was injured and felt like she had nothing left to give in a gruelling event which involves swimming (1.5 km), cycling (40km) and running (10km).

Being in a sport where a very low-body fat is the norm, 10 percent the gold standard, Duffy’s mission to get leaner backfired.

She ate badly and had lost 20 pounds. But by the age of 20, her childhood dream of becoming a world champion no longer fuelled her competitive spirit.

She got away from the sport and took up a job in a tourist shop in Bermuda.

After a while she decided to get a degree. She enrolled at the University of Colorado, Boulder, and studied sociology.

Eventually she made a comeback, finished 45th at the London Olympics, 8th at Rio, an achievement in itself after hitting a nadir in Beijing.

The 2018 Commonwealth Games medallist has been the odds on favourite to win the gold in Tokyo but bad weather because of typhoon Nepartak made her wait longer. The start was delayed by 15 minutes. Wind and rain made it tougher for the competitors.

When she spotted her husband on the home stretch, Duffy got emotional as she finished ahead of Georgia Taylor Brown of Britain and Katie Zaferes of USA.

Three years ago, Duffy started the Flora Fund to help Bermudian athletes to pay for registration fees, travel and equipment.

This fund promoted by the island’s only Olympic gold medallist may help in reducing the time gap between two podium finishes.

Smaller nations winning their first gold medal at the Olympic Games make for feel good stories but breakthrough winners are few and far between.

Kirani James was just 19 when he won the Olympic 400m final with a timing of 43.94sec. He created a sensation by being the first athlete from outside the United States to clock a sub-44 time. Since then Grenada has won one more medal, a silver by James at the Rio Olympics.

The landlocked European country has to thank middle-distance runner Joseph Barthel for their only gold at the Summer Games, in the 1500 metres. Barthel had finished ninth at the 1948 London Games and was a surprise winner in Helsinki. His namesake Joseph Alzin is the only other medallist, a silver in weightlifting, at the Antwerp Games in 1920

Anthony Nesty pulled off one of the biggest upsets in the pool when he beat American super star Matt Biondi in the final of the men’s 100 metres butterfly for the first ever medal, a gold, for the South American nation. An official stamp was issued, the national airlines named one of their planes after him and commemorative coins were issued. Four years later in Barcelona he won a bronze.

Bahamas has seen a mini windfall in medals since the first gold and they owe it to their track and field stars. Sailors were the path-breakers though.

Star class sailors Cecil George Cook and Durwand Knowles won gold at the Tokyo Games, the last of two medals in the sport (sailors bagged a bronze at the 1956 Melbourne Games). Since 1992, they have won 12 medals in athletics, including five gold medals. Shaunae Miller, the women’s 400m gold winner of 2016, was their last individual gold medallist.