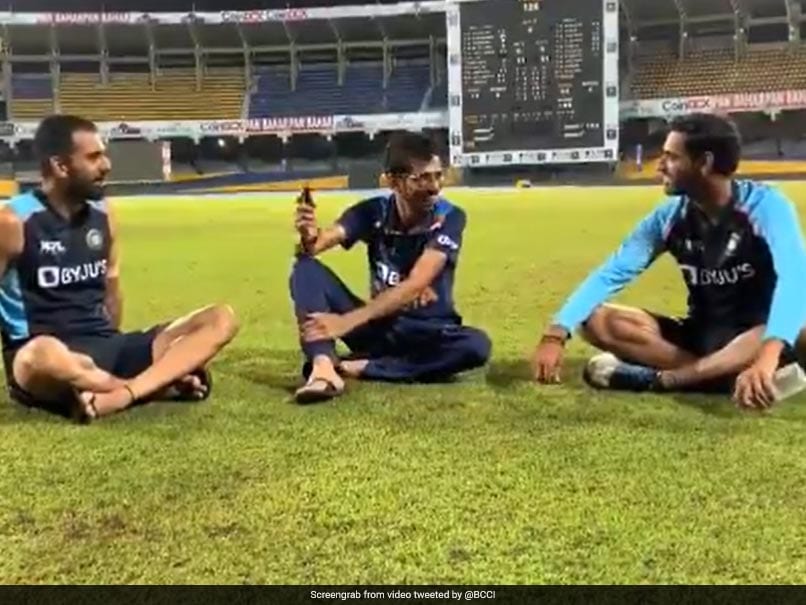 On Monday, India spinner Yuzvendra Chahal had two special guests – Bhuvneshwar Kumar and Deepak Chahar – on his show ‘Chahal TV’ after they won the first T20 International (T20I) against Sri Lanka. The official Twitter page of the Board of Control for Cricket in India (BCCI) posted a short clip of a grilling session of the two guests. “What happens when #TeamIndia’s swing kings Bhuvneshwar Kumar and Deepak Chahar are Chahal TV’s special guests? Yuzvendra Chahal tickles their funny bone & it’s laughter galore in Colombo,” BCCI captioned the 38-second-long clip on Twitter. The footage starts with Chahal welcoming Bhuvneshwar to the show and then accusing him of not appearing on Chahal TV.

Responding to Chahal’s allegations, Bhuvneshwar says that he was upset with the leg spinner as he never invited him on his show.

The Sunrisers Hyderabad (SRH) pacer also revealed his bowling plan, saying that it “was to make them play as many dot balls as possible”.

During the conversation, Chahar disclosed that he preferred to bowl after the powerplay as he could then have five fielders outside the circle instead of two.

Chahal also poked fun at Chahar’s guitar-playing skills asking him if he had learned any new song. Chahar, in response, said that he had, and also revealed that he dedicated his time to learning guitar after injuring his back while he was on bed rest.

The full chat session is available on BCCI’s official website.

Responding to the post, a fan said, “I love to see Chahal TV,” along with a bunch of red-heart emojis.

I love To See Chahal Tv

“I love Chahal TV,” tweeted another user along with two blue-heart emojis and a flag of India.

“So funny, love you all,” said another cricket enthusiast.

So Funny Lvu all

India have taken a 1-0 lead in the ongoing three-match T20I series after winning the first match by 38 runs. Bhuvneshwar Kumar was the star of the match, picking up four wickets for 22 runs in 3.3 overs.

The next match of the series is slated to take place on Tuesday, July 27, at the R Premadasa Stadium, Colombo.