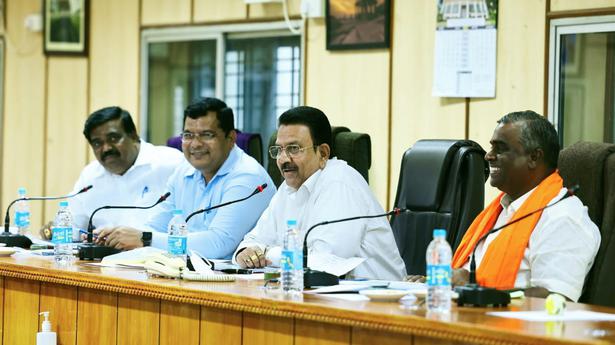 Warning officials and contractors against inordinate and unjustifiable delays in the implementation of government projects, Public Works Minister C.C. Patil has directed officials concerned to complete all pending works taken up by his department in the district before the end of August.

“The State government is not working to safeguard the interests of contractors. Public servants must understand this. It is the responsibility of the officers concerned to ensure quality of work as well as completion of projects within the stipulated time. I expect all the pending works taken up by the department, including those taken up under MLA Funds or under SCP [Special Component Plan for Scheduled Castes] and TSP [Tribal Sub Plan for Scheduled Tribes], to be completed by the end of August,” Mr. Patil said.

He was reviewing the progress of his department’s works at the Deputy Commissioner’s office in Ballari on Thursday.

Taking note of the availability of District Mineral Foundation (DMF) Funds, Mr. Patil directed the officers and people’s representatives to make use of the funds, if required. Responding to the Minister, an officer said that they are already doing it.

“We have taken up a project to develop the National Highway 63 stretch,” he said.

Pointing to heavy rain that has damaged public property in the district in the last few days, the Minister told the officials to take up works to repair roads and bridges that have been damaged in the floods.