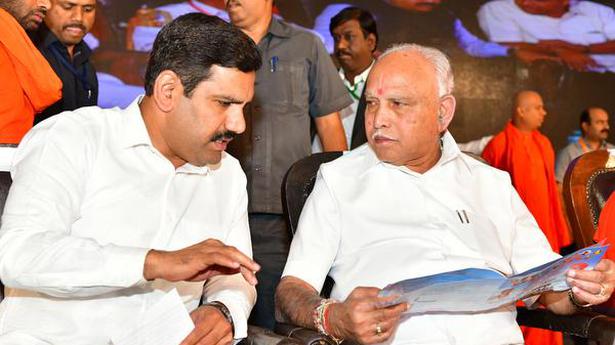 The apparent attempts of the Karnataka Chief Minister to mould his second and more politically ambitious son as his successor appears stuck for now.

Forty-five-year-old law graduate B.Y. Vijayendra, on whom his ageing father and Karnataka Chief Minister B.S. Yediyurappa leaned heavily in his fourth stint in the hot seat, also turned out to be his nemesis. The apparent attempts of the regional satrap – among the few from the Bharatiya Janata Party (BJP) stables – to mould his second and more politically ambitious son as his successor appears stuck for now.

Those who have seen him up close say that while Mr. Vijayendra’s ambition is his strength, the haste and the means he chose to achieve it were not palatable to most. Even as speculation is rife about Mr. Yediyurappa being replaced, Mr. Vijayendra is learnt to be lobbying with the party high command to anoint him Deputy Chief Minister under a non-Lingayat Chief Minister after his father’s exit.

Though Mr. Vijayendra started his career as secretary of the BJP Yuva Morcha’s Bengaluru unit in 2009 during Mr. Yediyurappa’s first tenure as Chief Minister, his elder brother B.Y. Raghavendra, two-time MP from Shivamogga, was tipped to be the patriarch’s political successor. But an aggressive Mr. Vijayendra, who reportedly played a key role in extricating his father from the legal quagmire he found himself in post 2011, has now occupied that slot. He has “sharp political instincts” and has a “Yediyurappa-like daring” to take on challenges, his close associates say.

However, his quick and phenomenal rise seems to have alarmed both Lingayat leaders and the party high command, leading to frequent push backs. One of the main reasons why some Lingayat leaders themselves turned dissidents to Mr. Yediyurappa this time was the fact that they saw no chance of growth under him, as Mr. Yediyurappa saw only his son as the successor. This was exploited by the Chief Minister’s political opponents within the party, a senior Lingayat leader from the party observed.

A mark of Mr. Vijayendra’s ambition was evident when he sought to contest against then Chief Minister Siddaramaiah in Varuna in the 2018 Assembly election. This is illustrative of the kind of person he is: keen to take tough challenges, sometimes reckless and always attracting undue attention. The party denied him ticket, but could not check his rise.

Mr. Vijayendra is known to have played a key role in wooing MLAs from the ruling parties and toppling the Janata Dal (Secular)-Congress coalition government in 2019. An audio tape that showed a JD(S) MLA being wooed had Mr. Yediyurappa asking the MLA’s son to speak to Mr. Vijayendra. Once the BJP came to power, he was seen as taking decisions on behalf of the father, controlling access to him and often being dubbed “super CM”

This irked many, turning him into a cause celebre for dissidence against Mr. Yediyurappa. Every dissident who spoke against the Chief Minister — Basanagouda Yatnal, A. H. Vishwanath or C. P. Yogeeshwara — have pointed to the “interference and corruption” of Mr. Vijayendra. As early as February 2020, less than a year after Mr. Yediyurappa became Chief Minister, two unsigned letters allegedly circulated by a group of disgruntled MLAs, made the same allegations against him. At multiple legislators’ meetings, Mr. Yediyurappa was asked why they should go to his son, who was a “nobody” either in the government or party, to get their work done. However, the Chief Minister, apparently owing to his advancing age, continued to rely on him heavily, triggering dissent, sources close to him say. This distanced even his earlier die-hard loyalists such as Shobha Karandlaje, currently Union Minister, from Mr. Yediyurappa.

On his part, consistently denying all corruption and nepotism allegations, Mr. Vijayendra has repeatedly claimed he was only “helping” his father due to his age, health and “betrayal of trust by his associates” landing him in legally troubled waters during his previous stint.

Though the party again snubbed him by not making him general secretary of the State unit, a role that he sought in 2020, but instead appointed him one of the 10 vice-presidents, Mr. Vijayendra took it on the chin and worked actively. He earned his stripes in the party organisation ensuring he was made one of the in-charges of key bypolls in Old Mysuru region: K. R. Pet in Mandya, from where his father originally hails, and Sira, in Tumakuru, both seats the BJP had never won before.

When the BJP won both, Mr. Vijayendra claimed sole credit for them. He went on to get recognised as a good election manager who created a new social coalition of castes neglected in these constituencies. He worked with grassroots workers camping in these constituencies for nearly a month, though his detractors attributed the success to money power and his muscle as the son of the top man. He failed to replicate his success in Maski bypolls, belying hopes of a “hat-trick”

While many resent his fast ascent — also because they see too big a contradiction in the rise of a Chief Minister’s son in a party that has made opposition to dynastic politics its main plank — even his opponents agree he has shown political potential. However, this will be put to real test only once his father ceases to be the Chief Minister and Mr. Vijayendra emerges out of his shadow.