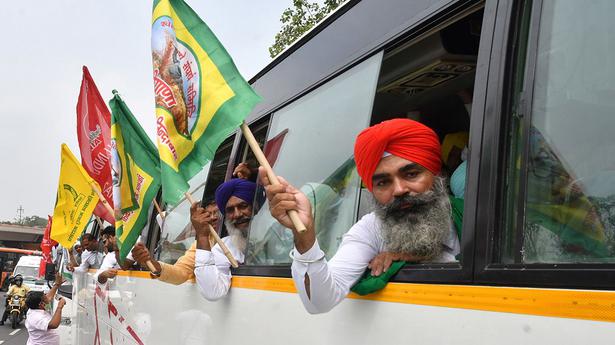 On the second day of the ‘Farmers Parliament’ at Jantar Mantar in Delhi, the ‘Minister of Agriculture and Farmers’ tendered his resignation after he “couldn’t meet eyes of the farmers”.

At the mock Parliament just a short distance from the Parliament building, Ranveer Singh Brar of the Bhartiya Kisan Union – Kadian, pretended to be Union Agriculture Minister Narendra Singh Tomar and attended to the questions raised by other protesters who took on the roles of MPs.

Mr Brar said Mr Tomar also hailed from a farming family with a humble background and added that when people attain positions of power, they forget where they come from.

On taking on the role of the minister, Mr Brar said, “Whenever I was asked a question, I would change the topic. If the farmer would ask me about the laws, I would talk to them about employment. I they would ask me about something else, I would start talking about COVID,” he said.

Every answer given by the pretend-minister was received with a loud roar of “Shame” from the gathered protesters.

The farmers’ parliament on Friday had 52 members who spoke and six who conducted the parliament proceedings including a speaker each from Telangana and Uttarakhand apart from Punjab. “The APMC Bypass Act brought in September 2020 should be immediately repealed by the Parliament; the Farmers’ Parliament repeals this Act, and orders the Parliament to do the same,” said Hardev Arshi from All India Kisan Sabha, one of the six speakers.

Responding to Union Minister of State for External Affairs Meenakshi Lekhi’s comment calling farmers mawalis (ruffian)— which she later withdrew — Mr Arshi said, “They find the worst word in the dictionary and call us that. One of the ministers said that farmers should come to the table and talk. Will one ever call a mawali for talks? We condemn it.”

“They [lawmakers from Punjab] should have voiced our concerns in Parliament and instead, they are attending coronation ceremonies,” said Raminder Singh Patiala.