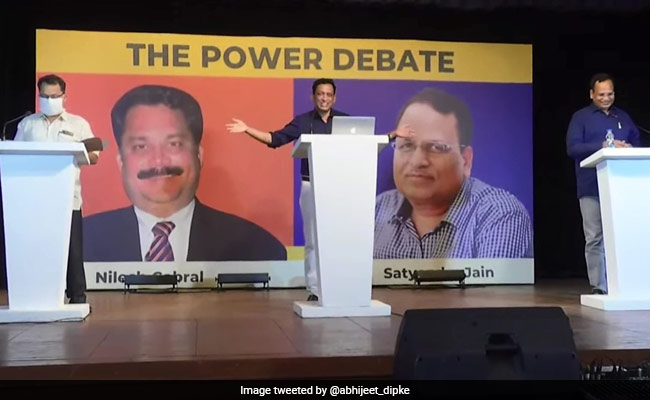 Can Goa get “free and uninterrupted” electricity? That’s what the power ministers of Delhi and Goa debated on Monday. Delhi Power Minister Satyendar Jain and his Goan counterpart Nilesh Cabral engaged in a pre-election public debate – in what is believed to be the first of its kind in the country – standing behind their podiums with a moderator in between.

Delhi Chief Minister Arvind Kejriwal, during his visit to the BJP-ruled state on July 14, had said each family in Goa will get up to 300 units of electricity free per month if his Aam Aadmi Party (AAP) is voted to power in the state Assembly elections, due in February next year.

Satyendar Jain, citing the Delhi power model, said, “We spend people’s money on people. Our plan for Goa is a separate Goa model. We will give 300 units free electricity to everyone. In Goa there is more power cut less power. netas get free power. people don’t.”

“Delhi has two to three Gencos. Goa doesn’t. Our power supply comes from far off places like Chhattisgarh and Himachal,” he added.

Mr Jain’s rejoinder: “These are all excuses. Even we get it from far off places, it’s all about intention.”

Goa’s Power Minister “admitted that his party has failed to provide 24X7 electricity, but the AAP will ensure free and uninterrupted power” if it forms the government in the state, the Delhi Chief Minister said after the debate.

“When ministers and government officials can get electricity for free, why can’t the common man who pays taxes get it for free? We have done it in Delhi and sure about doing so in other states. We missed the chance last time but believe we can form government in Goa this time,” said AAP MLA Saurabh Bharadwaj

The Delhi Power Minister flew to Goa on Sunday after accepting his Goan counterpart’s “challenge” for the debate on the AAP government’s model of electricity supply in the national capital.

Electricity has been one of the top election agendas of Aam Aadmi Party following its success in Delhi where it promised to halve power bills in 2013. Since then, the party has tried to emulate the promise in several states headed for elections like Uttarakhand, Punjab and now Goa.

The party’s opponents have countered this campaign, often by denouncing what they call freebies and saying such plans are unsustainable in the long run.