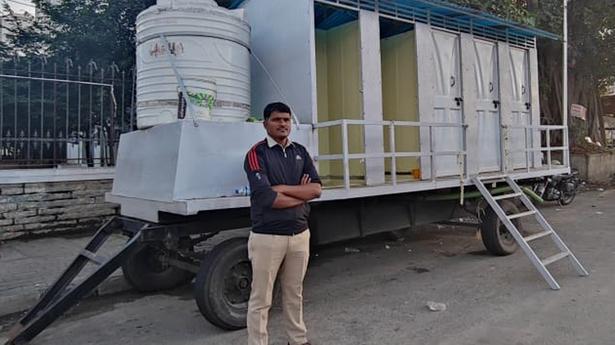 Bengaluru The Goraguntepalya area is a crucial junction and close to a major travel hub, yet has no toilet facilities, leaving most people, especially women, vulnerable. Now, help has come from an unlikely quarter: a policeman.

Shanthappa Jademmanavar, Sub Inspector at the Vidhana Soudha police station, has brought in a temporary, yet significant solution: a mobile toilet. What is also special is that it there are rooms for three categories of people: men, women, and transgenders.

The toilet, in fact, was inaugurated by a transgender from the area on Wednesday.

Mr. Jademmanavar told The Hindu that he installed the toilet with his own investment and with help from a few like-minded volunteers. “It’s a collective effort with like-minded people,” he said.

About the idea behind the mobile toilet, he said that while travelling with his mother, she had asked to use a toilet. He felt embarrassed and could not tell her that there were no toilets in the area. That’s when he decided to start the campaign.

Through the campaign, he appealed to relevant agencies, but it was in vain. After that he decided to take up matters into his own hands, with help from of a group of youths.

“The facility has been hired from a private company. The rent per day is around ₹15,000-20,000 but the rates haven’t been finalised,” said Mr. Jademmanavar.

He had been campaigning since February 2022 and trying to grab the attention of the government through social media platforms, but there was no response. To commemorate the 100th day of his campaign, he decided to establish a portable toilet in the area.

One worker has been employed to maintain the facility everyday and he is paid around ₹500 per day by Mr. Jademmanavar. Apart from that, it consists of a pit which can collect the waste of up to a thousand people and hold it for up to three days. The BBMP vehicle clears the waste once in three days.

People can’t believe this is a railway station in India