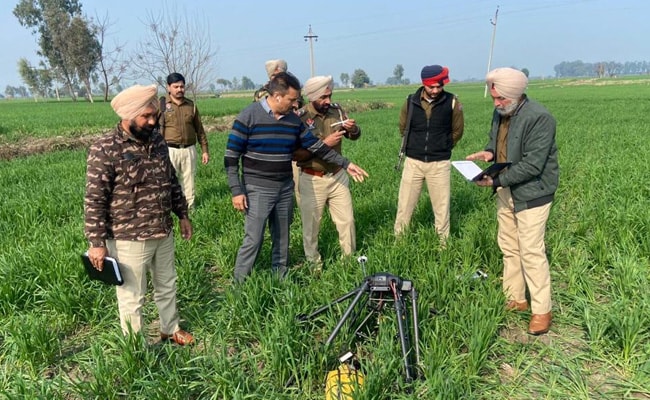 Two people were also arrested in this connection while they tried to flee.

Security forces on Sunday shot down a six-wing drone in Punjab’s Amritsar near the India-Pakistan International border and seized 5 kilograms of heroin, officials said.

Two people were also arrested in this connection while they tried to flee, they said.

According to Punjab Police, at around 4 am, a joint patrolling party of the Border Security Force (BSF) and Amritsar Police heard the humming sound of a drone and shot it down at the Lopoke area in Kakkar village, and seized 5 kg of heroin.

“In a major breakthrough, Amritsar Police, in a joint operation with BSF, have recovered a 6-wing drone after firing and bringing it down and seized 5 Kg Heroine from village Kakkar, which is 2 Km from the International border with Pakistan,” the Punjab DGP said in a tweet.

The DGP said that the drone parts were manufactured in US and China.

“2 persons were arrested with a total of 12 rounds fired from AK-47. The drone found is assembled, with parts manufactured in USA and China,” he added.

Earlier on January 19, two persons were arrested after a drone was caught at the Indo-Pak border in Rajasthan’s Sri Ganganagar. BSF seized around 6.150 Kg of Heroin, while 3 other persons managed to abscond.

According to the police, till now all the smugglers caught in smuggling are from Punjab.

In a similar incident from Rajasthan’s Sri Ganganagar, 2 were held for smuggling heroin to India from Pakistan through a drone. the incident took place on January 15.

Drones from the Pakistan side smuggle drugs and ammunition in India.

In another incident, the Border Security Force (BSF) seized four Chinese-made pistols among a consignment of weapons dropped by a Pakistani drone in Punjab’s Gurdaspur district on Wednesday.

The consignment which included 4 Chinese-made pistols, eight magazines and 47 live rounds was recovered from Uncha Takala village in Gurdaspur on the intervening night of Tuesday and Wednesday.